Is anyone looking at me?: World Class Athletes, Polo Horses and Posers at Bridgehampton Polo (not in that order)... 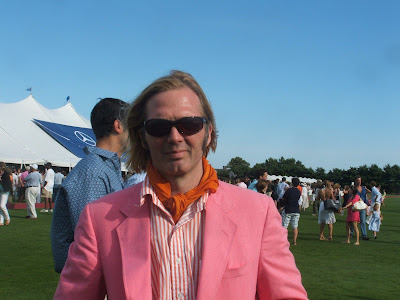 (This dashing gentleman was nice enough to pose for us) 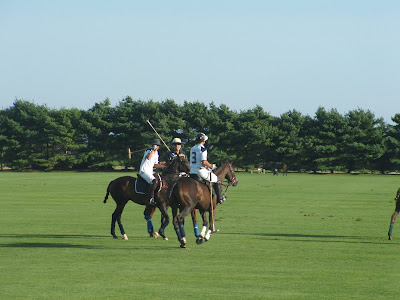 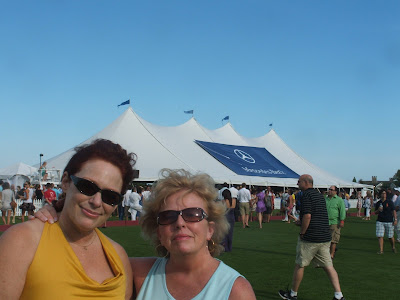 Mark and Lynn like to relax on occassion and we had never been to Bridgehampton Polo in all of our time on the East End of Long Island and we have always been eager to do so. At 20.00 a car it was not much more expensive than a movie and there was the always appealing lure of good people watching to maintain this as something to check out.

We finally went during the weekend of August 15 and were surprised at what a grim affair this was. There was no sense of elegance in the crowd young women seemed to adopt a standard issue uniform of short skirts and high heels, jeans and a starched shirt self-conciously untucked seemed to be the standard issue dress for men. The other category was couple with poorly behaved children three-four years old with names like "Coltrane" or "Tatianna." (As in 'Coltrane, don't fingerpaint on that that vintage Mercedes').

There are several matches within the season and it is always a possibility that we simply hit the event on an off day, but we were genuinely surprised how grim and desperate the crowd was. NOBODY seemed to be having a good time and people were looking around to see if A)someone was looking at them or if B)the person they were looking at was famous. Also, there was little in the way of event management: There was no sense of where to go or not go within the confines of the field and surrounding areas (if an event doesn't have at least on VIP section it is of little consequence in the Hamptons).

On the other hand the Polo was magnificent and the athletes involved truly world class. Too bad nobody seemed to notice....
Posted by markandlynnarefamished at 1:52 PM