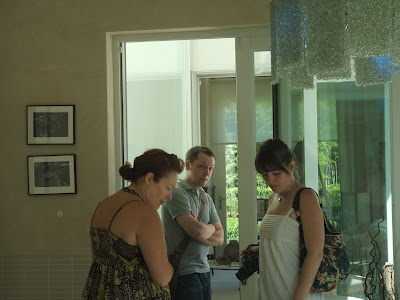 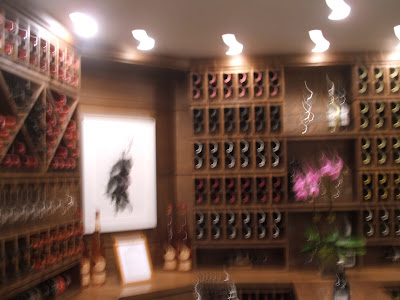 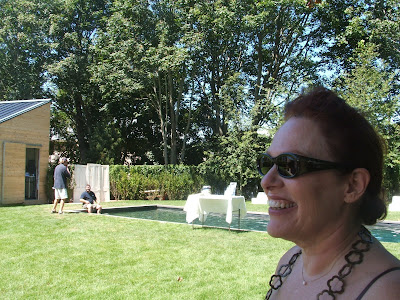 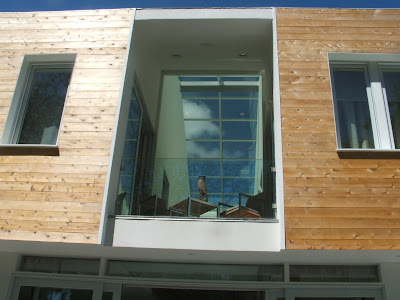 Mark and Lynn (plus EI and JP) visited the Hampton Cottage and Garden 2008 Idea House in Sagaponack. The house, originally the home of the novelist James Jones (From Here to Eternity), had a theme of “Green Designs for a Luxurious Lifestyle.” The house is meant to be a showcase for how energy and resources can be conserved without short-cutting stylish living. Many new methods have been put into play taking the approach of using, for example, recycled sheet rock, energy efficient Loewen glass windows, the use of the Mythic paint brand which specializes in low-odor, toxic and VOC-free paints, etc.

The house itself was visually stunning, but at the same time some of the design ideas were more underwhelming than expected. The basement gym seemed under equipped, the wine cellar was well-appointed and attractive, but in the end too traditional looking for a next generation type house. Children’s rooms were attractive, but too stagy looking to imagine real flesh and blood children inhabiting the spaces. The media room was a stunner (with the film From Here to Eternity playing on a 92 inch projection screen). The Art Studio toward the back of the property was a fully realized space and the Veranda and Pool House were eye-catching and worth the price of admission.

The Kitchen is in many ways the showpiece of the house, there is a 36 inch five burner gas cook top with a total rating of 60,000 BTU’s. The island counter top is made, along with the other work spaces in the kitchen, from IceStone, a COC-free surface material fashioned from recycled glass and concrete. Equally impressive was the series of seven foot tall, wood paneled Boffi cabinets.

Admission to the house is a hefty 30.00 (although some of it goes to a different charity every weekend). So, ultimately the house is a letdown and there is not necessarily a sense of getting one’s monies worth. Also, there seemed to be only one designer around the day we visited the house to explain some of her design choices (the very nice designer Adrienne Neff who talked to us for a bit about her challenges setting up a chic laundry room in the basement).