Interview-Author Iain Gatley explains the history and mythology of spirits in his book DrinK: A Cultural History of Alcohol... 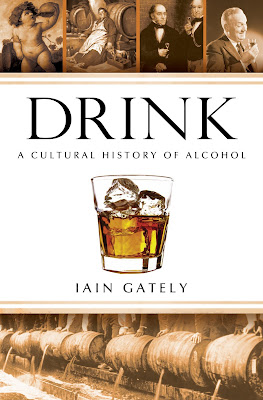 Author Iain Gatley has made a name for himself in examining the everyday substances of human existence and extrapolating universes of history, mythology and fascinating detail out of them. His work on Tobacco did this and now he is back with a history of Alcohol called Drink: A Cultural History of Alcohol (Gotham). Mark and Lynn were fortunate enough to correspond with Mr. Gatley from Spain and he was nice enough to answer a few questions about his work...

MLAF: In some ways this work might seem to be a natural follow up to your work on the history of Tobacco. Did you see a connection between the two?

IG: Whilst both Drink and Tobacco belong to the same genre, and each subject is treated in a similar manner, they posed very different challenges when I was writing them. I conceived of Tobacco as akin to a detective story - with plenty of bodies at the end - and arranged the book around a single question: why smoke? Drink in contrast deals with a far more equivocal substance – a sort of Jekyll and Hyde - which has been part of western culture for far longer than the evil weed, and which has done more good than harm. Alcohol, in moderation, is beneficial, and alcoholic beverages have an intensity and sophistication of flavour that other drinks lack. Most importantly, booze has been part of our diet for nearly 10,000 years. As a consequence, I had to consider a wider strata of each culture and era I examined."

MLAF: Were you surprised that the subject of Spirits and Wine was somewhat unrepresented in in popular histories?

IG: "In terms of a general history, yes. Whilst there is a vast body of work dealing with individual drinks – one could assemble an entire library dedicated to the wines of Bordeaux for instance - and also with alcoholism, few have attempted a synthesis of the influence of alcohol on our culture over time."

MLAF: Was there anything that you found particularly interesting in the research or writing of this work?


IG "Plenty – interesting, surprising and amazing. The sheer volume of alcohol people used to consume is staggering. King Edward II of England, for example, ordered over a million bottles of wine to celebrate his wedding in 1307, when the population of London was only 80,000; between the dark ages and the industrial revolution men women and children seem to have averaged a gallon of beer or a litre or two of wine a day. Viewing history through the bottom of a glass also introduced me to new things in each era I examined – the poetry of John Skelton, the correspondence of Benjamin Franklin, the settlement of the American West, to name but a few."


MLAF: Do you feel that the US has the most complicated ideas about alcohol and its consumption?

IG: "Absolutely. Prohibition has cast a long shadow. Americans have the greatest variety of attitudes towards alcohol in the world. Whilst some are connoisseurs of fine wines, or happy to put away a bellyful of beer when out drinking with their buddies, others choose to live in dry communities. Similarly, America produces – and consumes, a tremendously diverse range of alcoholic beverages, ranging from Stag’s Leap Cabernet Sauvignon through Jim Beam Bourbon to Bud Light, and while some places have honourable and ancient connections to specific beverages, there’s not the ingrained localism of many European countries. I’m writing in Spain right now, where it’s very hard to find any imported drinks, aside from premium brands of spirits."


MLAF: Did writing this change your attitudes or tastes with regard to alcohol?

IG" Yes. Studying the beliefs and prejudices of prior ages made me want to put some of them to the test: do beer drunks really only fall over backwards, as Aristotle hypothesised? The book also affected my choice of drinks, in a number of ways. Firstly it made me more open to trying different beverages like mead and absinthe, partly with the aim of finding out if they had the peculiar effects attributed to them by Vikings or 19th century Parisian boulevardiers; and secondly it focused me on quality rather than quantity: knowing how, for example, a style of wine is made, and what the vintner was aiming to achieve, have enhanced my appreciation of each glass I drink."

MLAF: Any films you think are fun with regard to spirits?

IG: "How about Breakfast at Tiffanys-or Tom Jones - both have splendid boozing scenes."

Posted by markandlynnarefamished at 10:28 AM