Editorial: Bring back the Epicurian 007... 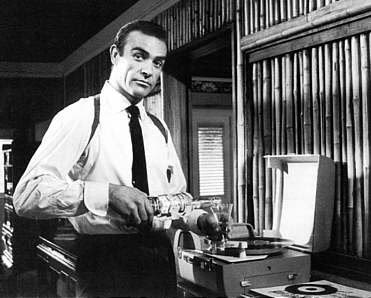 Quantum of Solace, the new James Bond film is a dissapointment from the standpoint of Bond the coneisseur of food and drink. The previous 007 film, the very fine Casino Royale saw the introduction of the Vesper cocktail to movie audiences. The origin of the drink goes back to 1953's original Bond novel Casino Royale:

"A dry martini," [Bond] said. "One. In a deep champagne goblet."
"Oui, monsieur."
"Just a moment. Three measures of Gordon's, one of vodka, half a measure of Kina Lillet. Shake it very well until it's ice-cold, then add a large thin slice of lemon peel. Got it?"
"Certainly, monsieur." The barman seemed pleased with the idea.
"Gosh, that's certainly a drink," said Leiter.
Bond laughed. "When I'm...er...concentrating," he explained, "I never have more than one drink before dinner. But I do like that one to be large and very strong and very cold and very well-made. I hate small portions of anything, particularly when they taste bad. This drink's my own invention. I'm going to patent it when I can think of a good name."
-Ian Fleming, Casino Royale

In the 2006 Casino Royale, 007 (Daniel Craig) orders the drink in almost exactly the same way. The 1953 drink would have been much stronger as those brands are less potent in 2008. However, a great cocktail is a great cocktail and the Vesper is a pleasenatly retro masculine drink with a great story behind it.


The dissapointment with QOS is that 007 is not the drink and food conneusuer of the novels nor of the films. Craig's Bond gets smashed in QOS (on six Vespers no less which should be potent enough to kill even Bond). Bond should drink, but never be drunk. 007 is often thought to be an alcoholic which is not true. He is a sensualist and man of the world. In none of the books nor the films does 007 get drunk.


Craig is the best Bond since Connery and he has a lot of the qualities that made Connery so sublime as 007: A great physical prescence, a particularly masculine point of view and a sense of a toughness that is authentic and intimidating. What Craig does not have is Connery's easy, gliding manner, nor his natural comic timing. I don't think this is because Craig is incapable of being witty or sleek. I recently watched Munich again and he has a very warm, re-assuring prescence in the film that is not in his two performances as Bond. I think the problem is that his Bond is not written in the way Connery's was. Without the food, drink and wit, Connery's Bond could have come off as a brute or a thug.
The writer's need to concoct a more sophisticated 007 or he runs the risk of being a blank superman like Jason Bourne. Craig is an absolutely talented actor at the peak of his powers and there is no reason that he could not bring some of the world weary sophistication of the early Bond films to modern audiences.

Posted by markandlynnarefamished at 4:24 PM 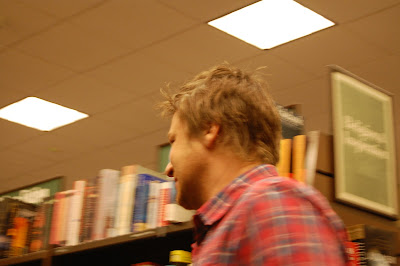 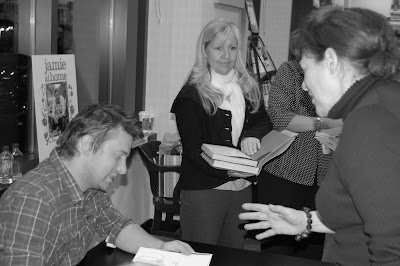 Mark and Lynn enjoy mingling among the common folk. So, it was with a good deal of anticipation that we went to the Barnes and Noble in Lake Grove on Long Island to meet the charming chef and television host in person. He was signing copies of his books, in particular Jamie at Home (Hyperion) which focuses on his personal experiences and philosophy more and his own interest in developing a personal garden which helps sustain his coooking.


We got there at about 5 and got a number for his scheduled 7 pm appearance. We then got a bite to eat and meandered back to the bookstore. The word came down about 6:30 that he was running about a half hour late. We then went to Macy's and killed some time. Finally, at about 8pm the Naked Chef strolled in easily, apologizing even as he got a rousing welcome. He quickly got down to signing books and even though patrons were discouraged from asking for personal pictures he charmingly complied.

Mark and Lynn were able to talk with him a second. Lynn asked Mr. Oliver what his favorite cocktail was.

Lynn mentioned that she had just seen a recipe and had asked for one at Painter's (a nearby favorite of ours). 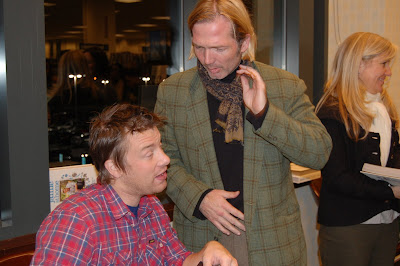 Mark mentioned that he had made a tempura based recipe from one of Mr. Oliver's early books and he had enjoyed the challenge of it.

"It was all over the kitchen." Lynn remarked.