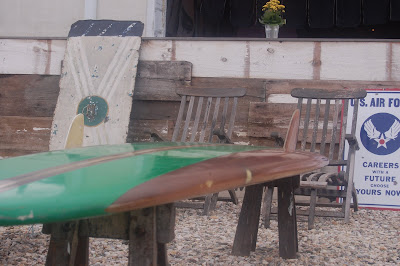 If you read the newspapers and check the interweb it seems that we are in a bit of an economic recession. I guess some of the folks in Montauk didn't get the news because when Lynn and I went out there on Father's Day we found a place called Melet Mercantile which is a kind of art gallery/retail space/salvation army.

This branch in Montauk (the other is located in Soho) is housed in an old garage near a taxi stand. The space is filled with old surfboards, used t-shirts and old magazines. The layout is achingly hip and artful and for the time we were there a local guy was working hard hitting on two of the women working there (explaining his take on the suddenly controversial Montauk Shark tournaments).

I will say that it the place was unique for Lynn and me in that everything was overpriced, really overpriced. Old OP t shirts that I used to buy for ten dollars at Surf City in Wrightsville Beach were upwards of $130.00. Beat to death library books with subject matter on skin diving or deep sea fishing were $100.00. Even in the Hamptons this is a bit much; and with the economy in such a lurch (which the East End has especially felt) it seemed a little in bad taste.

The place has been billed as a bit of an art gallery, but there was no real evidence of art except for a few framed Polaroids. The owner Bob Melet had been quoted as saying the place was supposed to be fun and a place to "gather and hang out." Apparently, the staff there that day did not get Mr. Melet's message as we were completely ignored during our short time in MM...