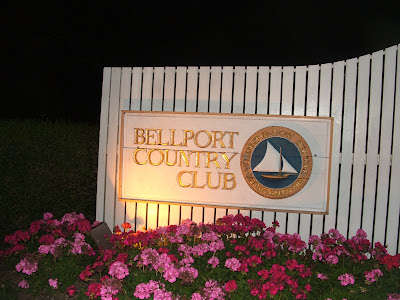 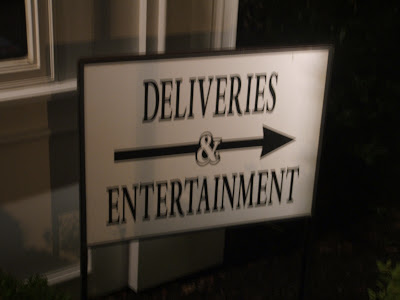 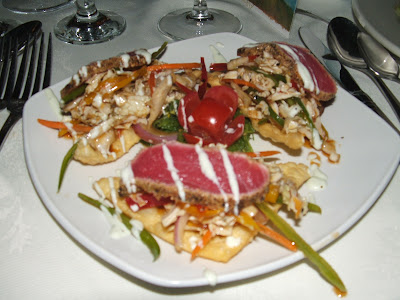 My father in laws 89th birthday was last week and to celebrate we decided to go to the Bellport Country Club near our own Brookhaven home. We had never really eaten there or had any particular interest in eating there (nor had anyone ever said anything much about it). In any event, a gift certificate was involved so we decided to go Lynn's brother and his family.

It is safe to say we did not expect much. Lynn loves Country Clubs, but mainly for the old Waspy patina that some of the older ones have.

The Bellport CC does not have that old Waspy patina. It is not without some charm, however. The staff was very warm and accommodating. The drinks were actually very well made, and the wine list was pretty decent and we had a really nice white from the Paumonak vineyard in Aquebogue.

I had seared tuna over asian slaw which was very good and a nice surprise. Some of the other entrees looked good, but were too fussily prepared and heavy handed in the presentation (a lot of sauces, some over-done vegetables). The dining room is pleasant with a nice look at the golf course. However, there was no music which made it kind of awkward with only a handful of diners early in the week. Not an embarrassment, but it could be much better with some more attention to details...

A funny footnote is that you can follow the Bellport Country Club on Facebook and Twitter! (I don't know if the place has enough going on to "Tweet" about)
Posted by markandlynnarefamished at 6:36 PM