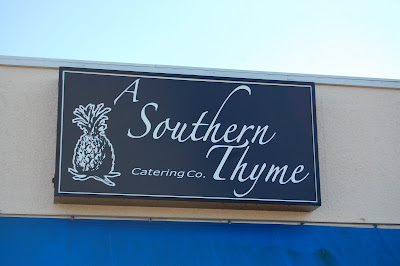 If there is one trend that has puzzled me with regard to food over the last 10 years it is the New York embrace of Southern cuisine. Pork Belly, a fetish for bacon, and barbecue had taken Manhattan by storm in recent years. Having been born in the South and lived there for most of my life I might be able to get away with saying that this trend puzzles me because most Southern food is not that great. Worse still, if it is poorly prepared it can seem heavy handed and overdone (this can be a real problem with barbecue). Why then does Southern food still get romanticized in the Northern press? Well, I think it is simply different and exotic in a way that makes it (the South) seem almost like another country. Also, this trend might have been a corrective to the stranglehold of influence Martha Stewart had on lifestyle and food. Paul Deen with her thickset figure and ball busting earth mama twang must seem like tonic to people fatigued by Stewart's Connecticut Yankee scolding.

Our recent trip to Wilmington North Carolina did little to win us over to the glories of Southern food. (See posts from this month). However, there are a couple of exceptions... 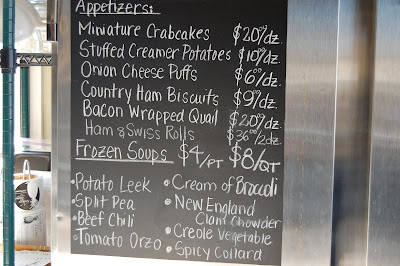 Lottie Arnold is the proprietor of the catering and take out gem in Wilmington called A Southern Thyme. Lottie has a particularly sentimental place in Mark and Lynn's soul as she catered our wedding (almost ten years ago!) to great acclaim.

At present, her energies are going into her present endeavor. We stopped by and sampled some of her great red velvet cupcakes and peanut sticks (a particularly Southern delicacy). The cupcakes in particular raised the bar for cupcakes in the Port City; and with their being far less than 3.00 we realized that we were out of the 5.00 gourmet cupcake stranglehold of the North East. 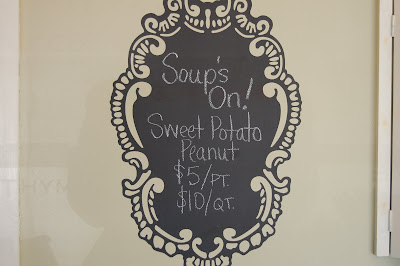 We were so busy on our trip that we didn't have a lot of time to do more than catch up to Lottie, sample a couple of her wares and pick up some stuff (like her own stone ground grits) for the trip back to snowy Long Island. What we managed to remember as a result of our seeing Lottie again was that Southern food at its peak can be both truly exotic and truly earthy at the same time. This kind of thing makes Southern food truly special and if everyone was like Lottie then Southern food would be uniformly great. Of course not everyone is like Lottie...