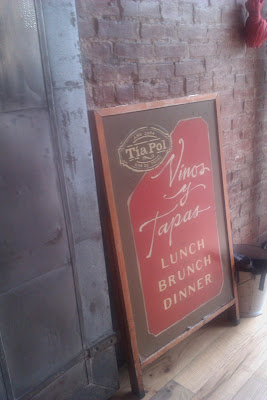 As we sometimes do, Lynn and I had been in Manhattan all day and had put off eating lunch because a) we were too busy engaged in something b) were looking forward to something unique for dinner.  This kind of anticipation acts as a stimulant to keep us going through some of the stress of being in NYC.
We had wanted to go to Red Cat but as we often do we were "famished" late in the afternoon when many restaraunts aren't open for dinner.  Red Cat, for instance, has a kitchen that did not open until 5:30; an eternity in our 5pm hunger state. 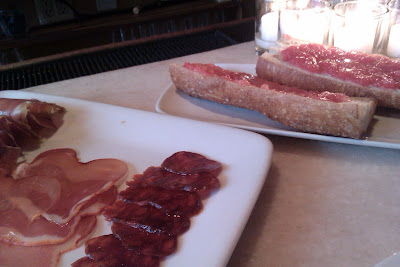 Out of ideas, we walked about half a block to Tia Pol, a tapas bar which occupied an attractive, sliver of a space on 10th avenue.  We got there just at the transition between very late lunch time and early dinner.  We had a nice, savory selection of garbanzos fritos (fried chickpeas), and a nice carpaccio style pork loin as well as a nice sangria that helped bring me back to life after a long day of being on my feet at the Javits.
The waitstaff seemed a little spent after a long afternnoon but were courteous and attractive.  We are in that area of NY often so we anticipate returning soon in the near future...
205 Tenth Ave.
(between 22nd and 23rd)
T: 212/675-8805
Posted by markandlynnarefamished at 8:29 AM