Mark and Lynn check out the situation and work our way onto the VIP list for the opening part of the Hotel Indigo... 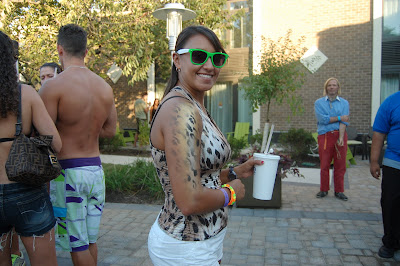 \
Lynn and I love the Hotel Indigo (or is it the Indigo Hotel?) and have stayed there many times while visiting our daughter in Boston. We appreciate it's chic appearance, nice restaraunt, reasonable rates and unobtrusive but helpful staff. Imagine our excitement when we found out that an Inidgo was going to open in supremely unfashionable Riverhead, NY. This weekend was the official opening of the Riverhead Indigo and we were in the area and so we thought it might be fun to see what the place looked like.
When we got there there was a phalanx of bouncers with boulder sized biceps, shaved heads and rather unnerving tatoos.
Oddly enough, they couldn't have been nicer and when we reasonably mentioned that we
merely wanted to see what the hotel looked like we had a VIP tag strapped around our wrist and before you could say "Grey Goose" we found ourselves walking into a sea of bikinis, pectorals and tatoos; in other words we had stumbled upon Hotel Indigo's "Five Day Labor Day Bachanal." 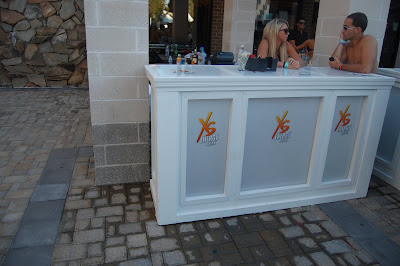 Lynn and I had seen our share of Hampton style decadence when we covered the Hamptons International Film Festival for several years in a row; suffice to say that we had seen nothing like we saw during our short stay at the Riverhead Indigo (Indigo Riverhead?) earlier today.  Oddly enough, there was an air of amiability in the air and everyone was very content and happy (see how happy the tatooed young woman is in the picture above).  Supposedly Dennis Rodman and Kevin Dillon were going to show up later which must be the biggest news for Riverhead since the Atlantis Aquarium got into town. 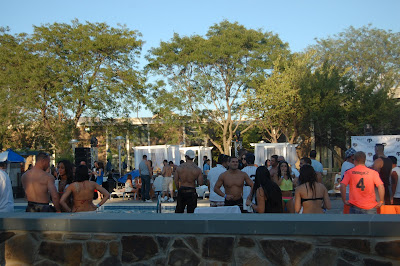 Posted by markandlynnarefamished at 6:58 PM