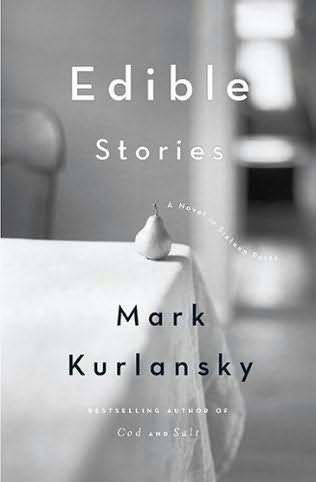 Author Mark Kurlansky well known for such culinary inspired non-fiction as The Big Oyster and Salt has just released Edible Stories: A Novel in Sixteen Parts (Riverhead).  As with some of Mr. Kurlansky's other works there is much made of the intersections of food and everyday life.  Mr. Kurlansky was nice enough to do a quick email interview with us about his work and what inspires him.
M & L: To fans of your works such as The Big Oyster and Cod Edible Stories seems like a natural evolution. Is this the case in your mind ?
MK: "I am not sure that it is an evolution. One of these stories was written before either of the books you mention and another at least predates the Big Oyster. But it all comes out of an idea that eating is a basic human experience and looking at food leads to all kinds of discoveries about history, society, and human nature."
M & L: Do you think the short story format suits stories relating to food better than a novella or novel?
MK: "I have written a novel a novella and short stories with food in them. It all works. I see food in almost everything. The advantage of a short story collection, even one like this where the stories are interconnected is that you can have a complete menu--a great variety of food and people."
M & L : In your mind was there a particular writer who really captured the essence of food or drink in fiction?
MK: "Emile Zola wrote about food as well as anyone I can think of although there are some serious contenders from France , Spain , Italy , and China . But Zola loved food and used it to set his scenes build his characters and make his social commentary with extraordinary richness. This is why I decided to translate his novel, The Belly of Paris, because I didn't feel it had been captured English, because it was such a pleasure to be immersed in it and because more than any other book I have ever read, I always felt this was a book I wish I had written. So, in a sense, I did. "
MK:  Does writing about food make you hungry?
"Not really but the question is, does it make you hungry. Just as not all food is appealing, not all the food I write about is appealing. I think Edible Stories shows that people have all kinds of relations with food far beyond physical pleasure and some of those relationships are a bit dark. "
﻿
Posted by markandlynnarefamished at 6:00 AM