Lynn and I joined our good friend Jane and her sister Suzanne (an expat from Australia) at Tullulah's in Bay Shore. Despite the fact that Lynn is from that area, we rarely venture into the Bay Shore area to eat.  We have enjoyed Tula's Kitchen on a couple of occasions, but were mostly unaware of anything else worth a destination trip.
Lucky for us, Jane noticed that the restaurant was hosting a cheese tasting on a recent night so it seemed like a good opportunity to see what was going on food wise in the area.
The restaurant has a Bowery vibe as it is located on a side street and has an understated, elegant exterior. One of the mini trends for"hip" restaurants in NY is to be vague about location and address so as to underline the "exclusivity" of the place. There is a bit of this kind of feel with Tallulah's as you have to kind of seek it out (Tullulah's) and there is a sense of exclusivity or discovery that makes restaurant goers feel "hip" or at least a little ahead of the curve. 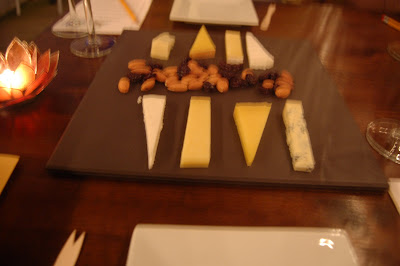 So it was with us.  The cheese tasting aspect of the evening was handled by the proprietress of a newish cheese store in Suffolk County.  The young woman proprietress brought some nice, gateway cheeses literally to the table.  The beginning of the evening was a little rough as she scolded some of the patrons (us included) for trying the cheese that was sitting in front of them/us when we sat down before she gave the word (to eat).  Our thoughts regarding this were 1) if food is in front of us chances are we are going to eat it 2) if you don't want us to eat food set in front of us how about saying something to start with (or wait to set the food in front of us?)  3) it is probably bad form and definitely a bad idea to scold paying customers right out of the gate who you are presumably trying to attract to your business.  In any event, we mostly chalked it up to nerves on the part of the young woman (the event started late which must have been stressful).
Luckily, Jane and Suzanne were good company and helped lighten the slightly tense mood.  It was a BYO event, so we brought a nice bottle of Smoking Loon Cabernet.  As was said, the cheese's were a nice intro to well, cheese (we were very familiar with the Catapano brand from years ago when we dodged the goats and livestock at the small DIY dairy producer at the gateway of Long Island's North Fork).
The save of the evening was by Tullulah's masterful chef who managed to produce a truly great series of dishes which managed to both electrify our senses and make our table fully alert and alive. At times I was aware of the  young women behind us prattling on about their rather unimpressive and clumsy ventures into the worlds of dating and casual sex.  At one point a non-descript door in the restaurant popped open and tow MMA grapplers spilled out (briefly) into the restaurant signaling that a martial arts studio was next door.
﻿﻿﻿﻿﻿
﻿﻿﻿﻿﻿

In particular, the Berkshire Pork Loin was an eye opener for both Lynn and myself ;  we are no big fans of pork but great stuff is great stuff and the Berkshire pork loin was a standout treat sweetened up as it was by the dried figs and cherry glaze.  Lynn thought the baked apple tartlet was the best dessert she had had in awhile (high praise believe me).
Most impressive of all was the fact that the chef came out at the end of the meal to introduce himself (We have never seen this before at a Long Island restaurant).  Chef/Owner Steven Scalesse is a warm, bearish guy with  sleeves of tattoos racing up and down his arms.  He could easily be a lineman for one of the small, local college football teams.  He was nice enough to show us the garden behind his restaurant out of which he creates aspects of Tullulah's menu.  These gestures helped close the evening out on a nice note and the somewhat rough beginnings of the evening were ancient history. 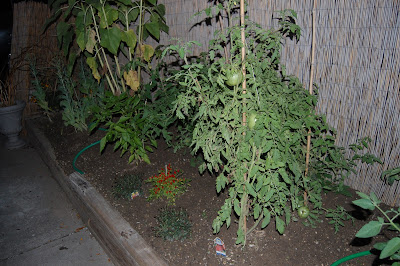 There are not many hip eateries on Long Island, particularly Suffolk County but this all may have changed (as fare as we are concerned) with Tullulah's...