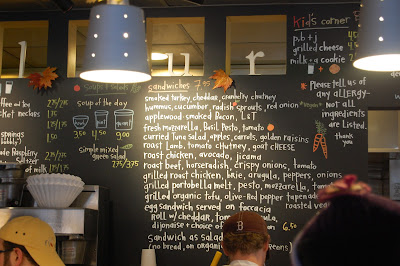 After our rather unfortunate experience at the Full Moon Cafe we were glad to have had a great experience at Flour.  Flour is a bakery cafe with three locations in and around Boston (we went to the one on Washington Street).  We stopped there fairly late in the day last weekend and had a very late lunch.  To our surprise the place was abuzz but thanks to an efficient staff behind the counter the line moved along quite quickly.  The menu was huge for a place that was relatively compact and for a place that makes pretty much everything fresh.  Lynn had a hummus, cucumber salad with radish and red onion that was served in a stainless steel bowl which helped make the presentation attractive as well as helped the salad remain icy cold.  I had a salad with grilled roast chicken, brie, arugula and peppers which had a good combination of crisp and creaminess (they also had my favorite condiment the Vietnamese hot sauce Hoy Fung Sriracha sauce). 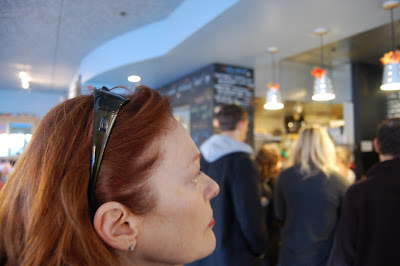 The interior was also very attractive with a cool wall sized blackboard with the menu scratched upon it; the space has some communal seating which we were lucky enough to snag despite the crush of customers.  The two young women sitting with us were quite nice and were predictably charmed by our two attractive grandchildren.  The population in Boston seem more at home  about this kind of thing than people in New York so the effect is actually quite pleasant and relaxed. 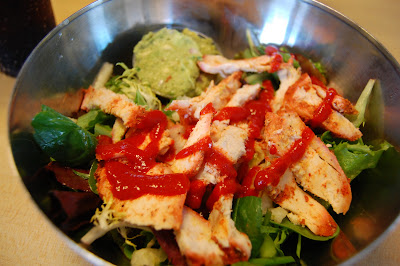