Mark and Lynn find the Dressler in Brooklyn to our liking... 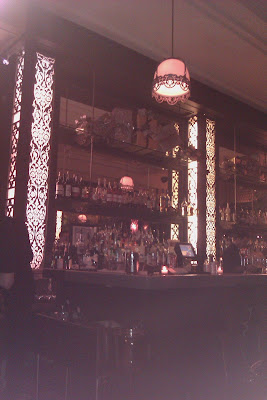 We finally got around to going to the Dressler in Brooklyn (the quote at the top of our masthead is from Dalia Jurgensen who besides being an author is also the pastry Chef at this restaurant). and were blown away in a small way.  Why in a small way?  Well, the pleasures of the place were subtle so as good as the food was it was a series of small pleasures that made the experience so sublime.  First off, there was the waitress who was attentive and tuned into us and who had an interesting looking leather apron draped around her torso.
Second, we were seated at a very attractive and singular booth where the two diners faced each other almost like Cary Grant and Eva Marie Saint did in North By Northwest.  This seemed to be a one of a kind booth in the restaurant which made us feel particularly appreciated. 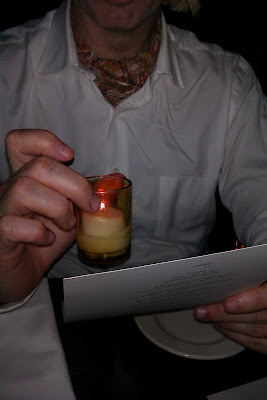 Things just continued to be great with a nice Pimm's Sicilian Cocktail (Pimm's, Blood Orange Liqueur, Fresh Lime and Fresh ginger) which proved to be a nice, warm (but not overpowering) drink for a cold winter's night.  Lynn had the venison special which was as buttery and flavorful as any great piece of Fillet Mignon (for instance); my grilled octopus was succulent as was my warm artichoke salad which had the perfect amount of lightness and heft.  Lynn ordered an otherworldly pumpkin cheesecake whipped up by our favorite pastry chef Dalia which finished off an impressive evening of memorable, but not over the top, dining.
Posted by markandlynnarefamished at 5:16 PM