Author and Farmer Kristin Kimball explains the ins and outs of the Dirty Life to Mark and Lynn... 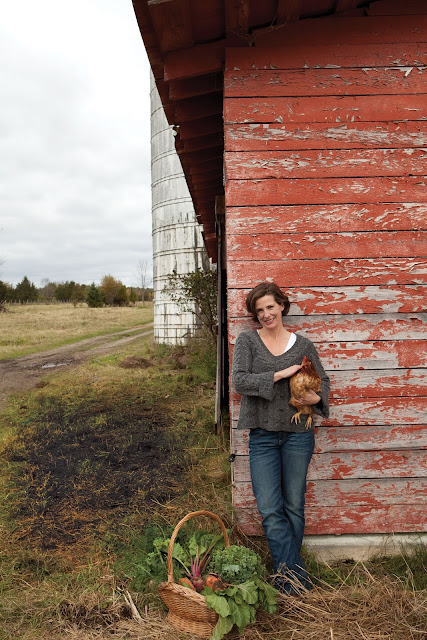 Harvard educated Kristin Kimball's life as a Manhattan journalist was glamorously bohemian but somehow oddly lacking.  Fate stepped in when she interviewed a charismatic young farmer in upstate New York (who immediately put her to work slaughtering pigs and hoeing) and it quickly dawned on her that her life was about to change and soon enough she swapped her sophisticated but stressful lifestyle for a physically challenging but emotionally rich existence running a co-operative farm in upstate New York with her interview subject (who ultimately became her husband).
The Dirty Life (Scribner) is Ms. Kimball's version of these events.  Her writing is very warm, sweet natured and refreshingly unironic.   At times, her narrative has a kind of early American quality (it reminded me of the film Drums Along the Mohawk which begins with an urbane society woman  leaving Albany to settle into the Revolutionary hornets nest in Central New York).
At present, she and her husband Mark run Essex Farm near Lake Champlain where they provide members of the farm a "whole diet" approach to organic farming where not only vegetables are provided (over 50 kinds) but meat, milk, poultry, honey, grains, lard and so on (again, all organic).  In between her "dirty life," Ms. Kimball was gracious enough to speak with us about her life, her work and what she misses about Manhattan.
M & L: When you decided to raise the bar on the CSA model by providing a "whole diet" approach to producing for the community was there a precedent that your farm was following? What made you think this approach would work?
KK: "As far as we know, we were the first. It's been fun to watch some of the farmers who have worked here go on to start their own farms, using a similar model. A lot of them are draft horse powered, too. We really didn't know if it would work or not, especially in our area, which is not exactly the most progressive place in the world. We chose this model because we both wanted to produce the food we liked to eat. So it was hedonism, really. And once you eat as well as a farmer eats, you can never go back."
M & L: How did you come up with the idea for the title?
KK: "As a farmer, you become intimate with all the things regular civilians avoid touching: shit, dirt, blood, sweat, guts, grease. But farming is also a sensual, romantic, physical, sexy life. So with the title, I tried to gesture at both those ideas. " 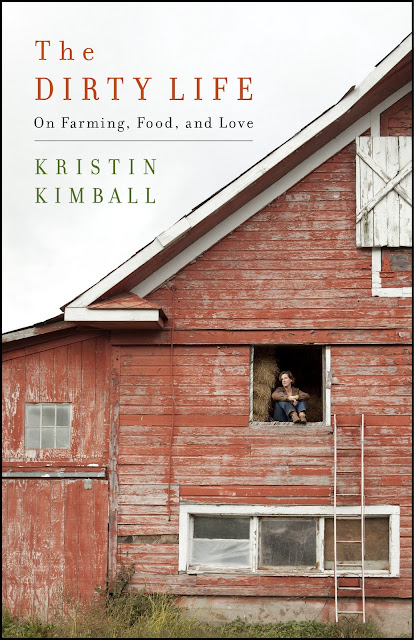 M & L: Your book cover is very striking; how did you decide to use this image?
KK: "Scribner sent a fabulous photographer, Deborah Feingold, to take the cover picture. I think she got it just right: a beautiful image, but unpolished. It says this is absolutely not a gentleman's farm, and that's the truth."
M & L: Is there something that your farm wants to grow or cultivate that you haven't had the time or chance to attempt?
KK: "Sheep! Also, a real orchard, with apples, pears, sour cherries. It'd be nice to have a cider house. We would like a cheese cave, and maybe a bread oven. I'd also like to get better at the things we do already."
M & L: Do you ever miss anything about life in Manhattan?
KK: "Fast-talking people. The way Manhattanites curse: eloquently, and without guilt. The sound of many different languages. Yelling TAXI. Bars, movie theaters, ethnic food. Most of all, my sister and my friends."
M & L: If you hadn't met your husband what do you think you would be doing now?
"KK: "Sheesh. Who knows. Probably still in the city, writing content for cash...."
Posted by markandlynnarefamished at 6:50 AM

A sexy restaraunt in the South End of Boston? Mark and Lynn experience TORO 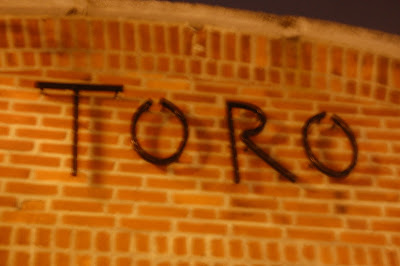 In our not completely limited experience of eating and drinking in Boston we have had pretty good eating and drinking experiences.  Never, however, before have we found a really sexy restaurant in the area;  until now, that is.  Toro is a tapas restaurant owned and operated by Chef Ken Oringer in the South End of Boston that has a great, diverse menu of small plate offerings after the Spanish fashion.
The space, as mentioned earlier, is quite sensual with great lighting, nice looking distressed seating and furnishings and warm, attractive servers and staff.  We have always thought Boston to be considerably more stressed than New York, but here, we found that customers seemed more relaxed and willing to unwind than usual. 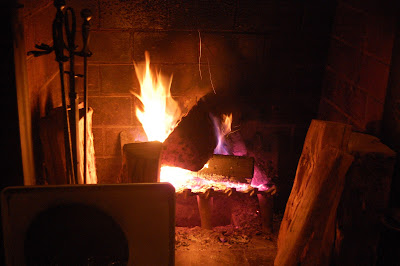 As for the food;  the beauty of Toro is that there are so many affordable dishes; there are several appetizer style dishes under $5.00 (we had Tuna Salad with anchovy, a sweet tasting Grass Fed Beef Heart with Romensco, and Toasted bread with tomato, garlic and sea salt-all less than $5.00).  Other offerings we enjoyed were the griddled garlic shrimp; a hefty and spicy paella made for two and corn on the cob with a kind of spicy creme sauce adorning it that was as sweet and filling as any dessert. 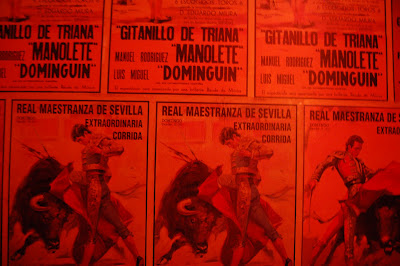 Boston is a progressive city when it comes to being green (sometimes annoyingly so).  Toro is justifiably proud of not only its use of local fare and  Toro's website makes mention of a myriad of green practices such as the fact that they are partners in attempts to recycle wine corks to make footwear as well as the fact that soy based inks are used in the printing of their t shirts.  This kind of thing seems less self-conscious in the context of Toro's chicness and allure.  In any event, Toro is well on it's way to becoming our favorite dining spot in Boston.
Posted by markandlynnarefamished at 3:06 PM

Mark and Lynn eat up Sweet in Harvard Square 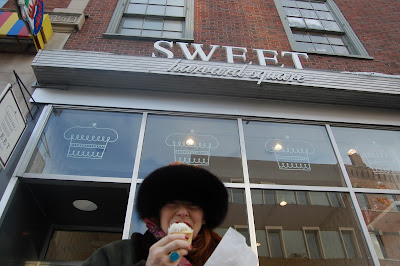 Toward the end of our weekend, Lynn and I found Sweet; a cupcake and cake boutique in Harvard Square called Sweet.  The elegant and attractive place had what Lynn thought were the best cupcakes she had ever had (particularly good was a red velvet cupcake). The interior was particularly striking and seemed more like a jewelry store than a bakery; no real surprise then that the big screen TV was playing Breakfast at Tiffany's. 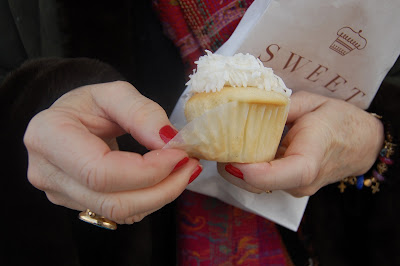 Posted by markandlynnarefamished at 5:56 PM 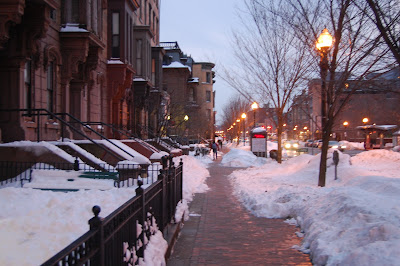 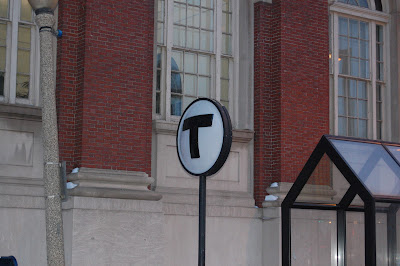 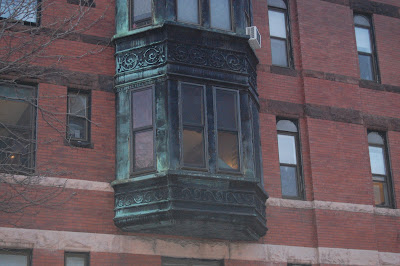 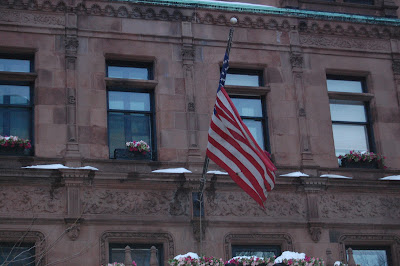 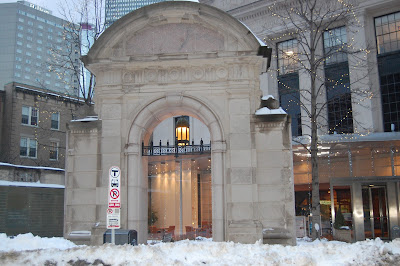 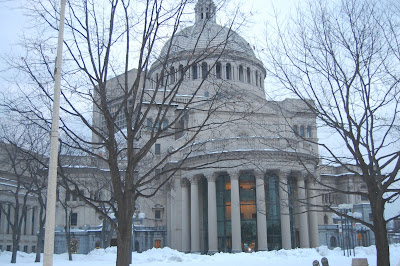 Posted by markandlynnarefamished at 1:28 PM