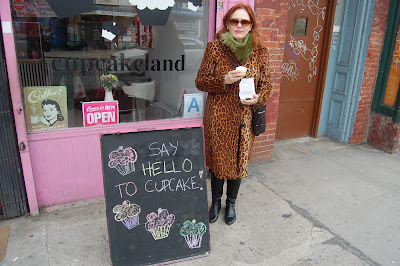 Lynn had gotten it in her head that she wanted cupcakes from Brooklyn.  We also wanted to have something to eat from Bark.  So, we drove into Brooklyn ate at Bark and made our way over to Cupcakeland on Metropolitan in the Williamsburg area of the burough.  The space was minmal but the cupcakes were amazing.  Lynn particularly loved the Red Velvet cupcake which had a standout whipped cream cheese frosting that had a great, lush texture.  It was also a bargain at a mere 2.50.
M & L
Posted by markandlynnarefamished at 3:44 PM