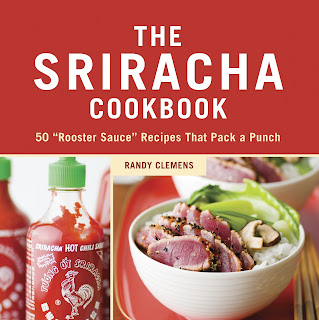 The breakout ingredient for the new decade is without a doubt Sriracha.  The so-called "Rooster Sauce" (so-called due to the distinctive graphic rooster on the bottle) was Bon Appetit magazine's ingredient of the year in 2010 and to begin 2011 we have  The Sriracha Cookbook: 50 Rooster Sauce Recipes that Pack a Punch. This work is author Randy Clemens' attempt to broaden the horizons and uses of this litterally and figurartively "hot" sauce.

Author Clemens' fills in some of the origin of the particullarly popular brand of hot sauce turned out by Huy Fong Foods; for instance, the rooster on the side of the bottle is in commemoration of Huy Fong Foods founder David Tran's  birth year as determined by the Chinese Zodiac ("roosters" are often thought to be good in the kitchen); the sauce is not the only brand of Sriracha either as there are several Thai inspired versions including popular brands Golden Mountain and Shark Brand (these tend to be milder  on the whole). Another footnote of particular interest is that Sriracha is not a traditional staple of Vietnam but is more related to the Vietnamese-American tradition since Tran actually developed the concotion in California in the early 80's where it gathered a kind of following due to it's heat, flavor and memorable packaging.

Mr. Clemens does an impressive job of rolling  out a number of creative recipes that revolve around this shall we say charasmatic sauce.  Some of the recipes seem like a natural fit for the stregnths and tasts of Sriracha such as a Gazpacho recipe made with Sriracha; others seem like a hip utilization of the Vietnamese staple like Sriracha and Spam Fried rice; others seem like a kind of great novelty such as a number of Sriracha inspired cocktails most memorably a twist on the Bloody Mary called a "Bleeding Mary."

There is much more here, even a nod to the DIY foodie movements where there is instruction to make your own Sriracha; perhaps Lynn and I will make some for friends in between making Bleeding Marys...
Posted by markandlynnarefamished at 9:42 AM