Mark and Lynn run into Anne and Lousa...

Lynn and I had the opportunity to attend an event at Southampton's Parrish Art Museum with the great writer James Salter as well as the very fine Portuguese artist Juliao Sarmento entitled Artists and Writers/House and Home.  While there, we ran into Louisa Hargrave and her lovely daughter Anne. Ms. Hargrave, an old acquaintance with whom we had met and worked with at a couple of film festivals and food & wine event. Ms. Hargrave is well known as an author (most notably her memoir The Vineyard) and advocate for Long Island wine.  While in her presence she made some recommendations of wines from local LI vineyards which we are sure to check out as the weather gets more agreeable and wine drinking moves to the great outdoors.
Posted by markandlynnarefamished at 9:11 AM 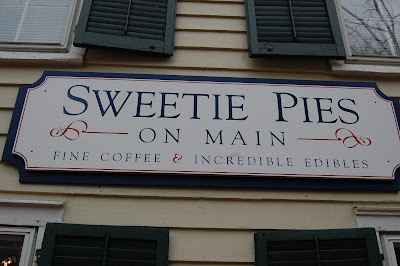 Lynn had a reading with an astrologer early last Sunday in Cold Spring Harbor.  Finding ourselves in the unusual position of being slightly ahead of time we stopped in the charming town to get some coffee and a bite to eat  so that Lynn would have her stregnth to get through the hour reading she was about to experience.  Lucky us; we found Sweetie Pies on Main an achingly charming coffee, tea and edibles establishement.  Lynn had a very robust, healthy cookie full of sunflower seeds, cranberry and oatmeal which raised her blood sugar level without the eventual crash that a sugary cookie might.  Safet to say it also gave Lynn the boost she needed to get through her long, detailed reading early on Sunday morning...

M
Posted by markandlynnarefamished at 1:00 PM

Barrique brings at touch of Brooklyn to Babylon, NY 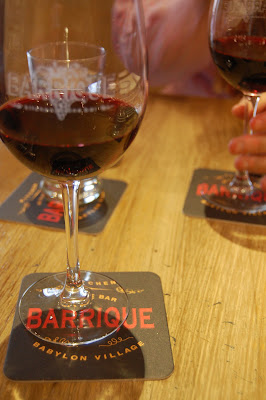 Babylon New York is a nice, attracitive little town on Long Island's It is the kind of town that one of the characters on Mad Men might have commuted from in the 60's; very charming and loaded with Americana imagery.  It is not necessarily known as a food mecca but it does have the well regarded Argyle Grill and across the street from Argyle Babylon now boasts Barrique a small European style bistro with charming rustic touches like rugged, re-claimed wood (a la Fatty Cue in Brooklyn).  Barrique apparently means small, oak barrel (typically used in wine making) and the restaurant does have a "vine forward" point of view with a great variety of wines and a clever offering of wine pairings (such as a "dessert wine" pairing that we hope to try in the future).  Impressively enough, the amount of available wines is extensive but not overwhelming (a lazy habit of big restaurants trying to impress clientele). 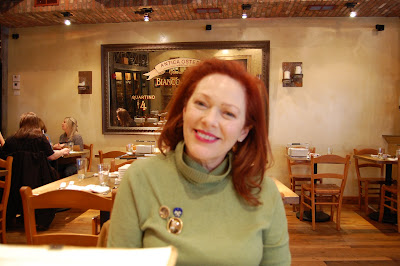 Lynn had a refreshing cocktail of St. Germaine, Aperol and Champagne and I had a nice glass of Layer Cake Shiraz.  Lest we forget about the food Lynn and I split a Delicious dish of sauteed calamari with a robust sweet plum sauce and possibly the best mussels we have ever had; they were cooked in white wine and garlic (nothing unusual about that) but they also seemed to have some kind of coconut milk as part of the flavoring which added an extra layer of sensuality to the texture of the mussels. 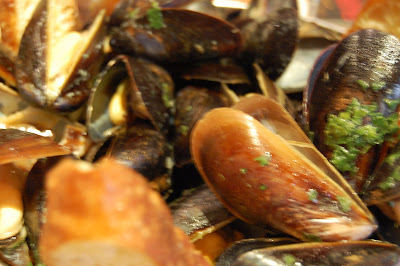 Lastly, the wait staff was attractive and first rate and made us comfortable on every level.  Barrique is a great addition to Babylon and a place we are already making plans to revisit...