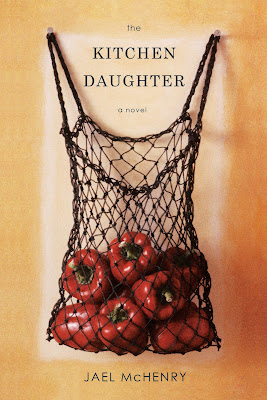 Ginny Selvaggio, the heroine of Jael McHenry's debut novel The Kitchen Daughter (Gallery Books) has Asperger's Syndrome a "high funtioning" form of autism that usually has a strong component of difficulty with even the most fundamental social interactions.  After a tragic accident, Ginny finds herself in a state of confusion and stress which is only remedied when she cooks.  The ritual of cooking particularly cooking recipes from her own familial experiences not only assuages her anxieties it creates a kind of supernatural aura in her life that is both mesmerizing and comforting to her bruised psyche.

Ms. McHenry was nice enough to correspond about her work with Mark and Lynn where she mused about Ginny, her own likes with regard to food and drink and who might play Ginny if and when The Kitchen Daughter makes it to the big or small screen.

M & L: How did the striking cover design come about?
JM: "It’s amazing, isn’t it? I can’t take any credit for it whatsoever. Early on in the process my editor had asked me for ideas, and I sent her some very spare, minimalist photos of kitchen things – and then the art department came back with this beautiful, warm, evocative design that was so much better than anything I’d imagined. All I had to do was say yes. I love that it makes you look twice. "
M &L  It seems that cooking and eating are two wholly different experiences for Ginny; why do you think that is?
JM:  "I think it’s pretty unusual to separate the two so clearly – I, for one, really love both – but for her, it makes perfect sense. The act of cooking is very reassuring for her, going through the steps, following the instructions. She’s not all that interested in the result, other than it turning out “right.” It’s about the process and how it makes her feel."

M & L: The book would have certainly been a moving and interesting work without the element of the character's Aspergers-Did you contemplate leaving this out at any point?
JM: "I did, midway through the process. I was lucky enough to have several agents interested in representing the manuscript, and more than one spoke up and said they thought it’d be an easier sell without it. So I took some time to think about it, and in the end, I decided I just wasn’t okay with letting go of that aspect of the story. It was important to me to keep it, and I’m really glad I did."
M & L:  Have you heard from individuals with Aspergers (or their families?) What has their reaction been?
JM: "That’s one of my favorite parts of having the book out there in the world – hearing from readers. And I’ve been blown away by the positive response from people who have friends or family members with Asperger’s, and Aspies themselves. Everyone’s experience of Asperger’s is different – there are an infinite number of places on the spectrum where people can land, and if you’ve met one person with Asperger’s, you’ve met one person with Asperger’s – but so many people have written to say that Ginny reminded them of the Aspie in their life, or that they felt I captured some of that perspective in a way they’d never seen before. It’s really wonderful. "
M & L: Do you ever think about Ginny?
JM: "Oh gosh, all the time. A lot of readers have been asking whether I’ll write a sequel to The Kitchen Daughter, and I don’t have any plans to do it right away, but I have definitely been thinking about where Ginny’s story would go next. I’m very attached to her!"
M & L: Between the Aspergers element of the novel and the supernatural elements of the book did you ever worry that you were juggling too many elements for one book?
JM: "You name it, I’ve worried about it! So that was definitely a concern. I felt like the ghosts, the Asperger’s, and the cooking were all essential elements of the story, and I tried to keep them all in balance. That took a lot of writing and rewriting, but in the finished product I think they all fit in where they should. "
M& L: If KD is turned into a television or feature film do you have an idea of who might play Ginny?
JM: "As I was writing, I was picturing the actress Zoe Kazan, who I’d seen on Broadway shortly before I started working on the book. And she’d be a great choice. But I’d love it even more if the producers would explore the idea of having a young woman with Asperger’s play the role. Heather Kuzmich, who was a contestant on “America’s Next Top Model” a few years back, would actually be just about the right age. Of course it’s highly unlikely that I’ll have much input if the book is optioned for film or TV, but it’s also impossible not to speculate and wonder at least a little!"


M&L:  Your bio makes mention of the fact that you made it to the semi finals in the Jeopardy College tournament-What was that like?
JM: "Crazy! I was a senior in college, and the chances of making it were so incredibly slim, it was absolutely unbelievable when I made the cut to appear on the show. (I don’t know which is less statistically likely, getting a novel published or getting on College Jeopardy!, but they’re both nearly impossible, so I’ve been very very lucky twice now.) And it was just a complete whirlwind. Flying to L.A., taping two weeks of shows in two days, meeting Alex, all that craziness. And I didn’t win, but I made a killing in consolation prizes. Klondike bars, electric toothbrushes, Hooked on Phonics, you name it. "
M &L: Do you have a favorite food? Cocktail?
JM: "My favorite food is probably potato puffs – you mix cream puff dough with mashed potatoes, then drop spoonfuls into hot oil to fry them. Cocktailwise, I think it’s hard to beat a good Manhattan."
(For more about Ms. McHenry's life and work check out Simmerblog)
Posted by markandlynnarefamished at 3:30 PM