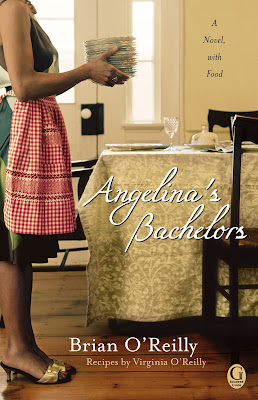 Angelina's Bacheolors is the story of Angelina D'Angelo a young widow who channels her grief through the healing process of cooking which leads her to an older retiree named Basil Cupertino who is beyond seduced by her prowess in the kitchen and offers her much needed employment as his day to day cook.  This opportunity leads her to cook for a series of Bachelors who fall under her spell one by one.  Angelina's Bachelors is the first novel from prolific TV producer Brian O'Reilly who has created one of the Food Network's most popular offerings in Dinner: Impossible and co-authored two popular cookbooks Mission: Cook! and Impossible to Easy.  Mr. O'Reilly was nice enough to correspond with Mark and Lynn about his work, his tastes and the process of creating Angelina's Bachelors.

M & L :Did working in TV help in the writing of this book?

BOR: "Yes, largely in terms of the culinary aspects of writing Angelina’s Bachelors, seeing top chefs under pressure, seeing how they think, how they construct dishes, then seeing how people react when the food arrives on the plate in front of them, was a real eye opener on every level. The show also led to the writing of two cookbooks: Mission: Cook! and Impossible to Easy; the work we did on those books comprise a big part of our culinary baptism by fire (actually, probably more for Virginia than me; she did the recipes and tested every single one, made adjustments, to make them accessible to the home cook). One of the important themes of our show was relating food back to dramatic situations (home-style cooking for soldiers heading for Iraq, Elvis’ favorite dishes for fans at Graceland, an authentic Colonial banquet for the old ways food experts at Williamsburg…). That really informed the idea of relating Angelina’s cooking to the story arc of the book and back to her relationships with the various characters. The first breakfast dish Angelina made for Basil would not have been the right choice for, say, Don Eddie; and she would only teach the secrets of her red gravy to Tina, I think."

M & L: Do you have a particular favorite book/film that has food as a central theme or motif?

BOR: "Lots of them. A current favorite film is Bottle Shock. It’s primarily about wine, but take a look at Alan Rickman’s character, Steven Spurrier, as he takes his first ever scoopful of guacamole: priceless. The same sentiment goes for Clemenza teaching Michael Corleone the secrets of his red gravy in The Godfather. Like Water for Chocolate, Big Night, Chocolat are excellent; Julie and Julia was great fun. Ratatouille is the reigning champ in our house (and honorable mention goes to the eggs Olympia Dukakis cooks near the beginning of Moonstruck). "


M & L: What was it like collaborating with your wife on this?

BOR: "Angelina’s Bachelors was labor of love for both of us. Virginia’s not only brilliant in the kitchen (ME: “Um… I need a recipe for the most spectacular layer cake ever made… and it needs to have Frangelico in it?” HER- two days later: “Here you go.” ), but is the most incisive reader I know; she also has a keen eye and ear for pulling the important points out of a given scene. The name Angelina was her suggestion (as was the original idea that inspired the book). One of my favorites: her suggested title for Chapter Four: “In the Wee Hours of the Mourning.” No chapter’s ever finished until she’s taken a look-! "

M & L: Were there any recipes you had to leave out of the book?

BOR: "There were quite a few, mainly for space, pacing and dramatic considerations. We’re toying with the idea (if things go according to plan) of, hopefully, writing an Angelina cookbook-- time will tell."

M & L: What was it like writing from a woman's perspective?

BOR: "I have to admit, it was a bit more difficult than I expected, especially through the first draft. Again, Virginia was an indispensable resource (she likes to say that she can show me pages from the other team’s playbook). My agent and editor are both women, so I had a lot of advice. And, male or female, as things come together, the characters start speaking for themselves in a very real sense, no matter their gender."

M &L : Who do you imagine playing Angelina in a film/television? Basil?

(For more on Angelina's Bachelors go to Facebook.com/Angelinasbachelorsbook)
Posted by markandlynnarefamished at 9:51 AM