Mark and Lynn are sad to see the once great Ace Hotel lose its cool... 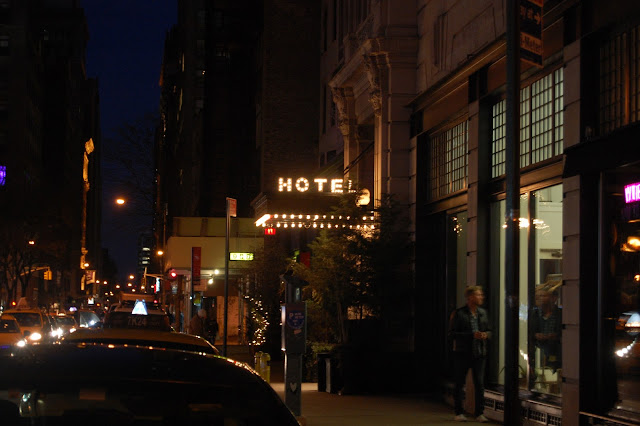 Lynn and I had eaten at the Breslin in the Ace Hotel about a year and a half ago; it was a very pleasurable experience for us as the decor was amazing, the food unusual and the staff very friendly and accomadating. We had visited Manhattan over the weekend and were to be in the general vicinity of the Ace Hotel so we thought it might be good to stop there for a drink/something to eat late in the afternoon.

When we arrived, the hotel lobby was quite busy with the couches/library tables and the floor area in general packed with (I cringe to use this overused term) "hipsters."  Many were hunched over their I-Pads and/or laptops without any evidence of their being customers (no drinks/no food) of the establishment.  There was a bar in the back of the hotel lobby where we had hoped to land, but, alas it was full.  We then made our way to the Breslin which was full, but not packed.  We managed to find a perch at the bar.  It was about 4:30 and we were waiting to go to the Ace's John Dorry Oyster Bar which adjoins the hotel.  Problem was the John Dorry didn't open until 5 and we were quite hungry.

We started by ordering drinks; the young male bartender with his skinny arms, skinny jeans, tatoos and artful bed head was attentive but acted odd on the whole.  For instance, I ordered a simple Manhattan and thought they might have Old Grand dad bourbon.  He said they did, and waited a beat, and said they had just ran out.  Lynn ordered a glass of wine and asked if there were any bar snacks, the bartender said they had just put the snacks away (not sure what that meant as there were plenty of bar patrons and they were still drinking).  In any event, we ordered our drinks and the young bartender mixed a nice drink (with bourbon soaked cherries) that helped us relax for the moment.

About 15 minutes later the bartender mentioned that there were some bar snacks available.  At that point, we had written off eating until at least 5 so we were glad to have anything at that moment as 5 o'clock still seemed cruelly far into the future.  We were then presented with a bag of 6 almonds and a bag of chips that cost us $15.00.  Now, I have never paid for bar snacks and since they weren't on the menu imagine our surprise that we had to pay not just a little, but a lot.  In retrospect, we should have just begged off, but we were too hungry to let a few dollars thwart us and not in the mood to take the bartender to task about not warning us that the Breslin is the only place in the universe to charge for bar snacks.

In our tired and annoyed state our feeling was that the Ace Hotel had evolved from a kind of charming place pioneering interesting food and design into a den of phony poseurs whose casual attitude disguised a general loathing for their clientelle (well parodied in the Portlandia sketch about the "Deuce Hotel").   Unfortunately, this feeling persisted for us days after...

Posted by markandlynnarefamished at 7:19 AM