Canlis Salad eases the pain of detox for Mark and Lynn... 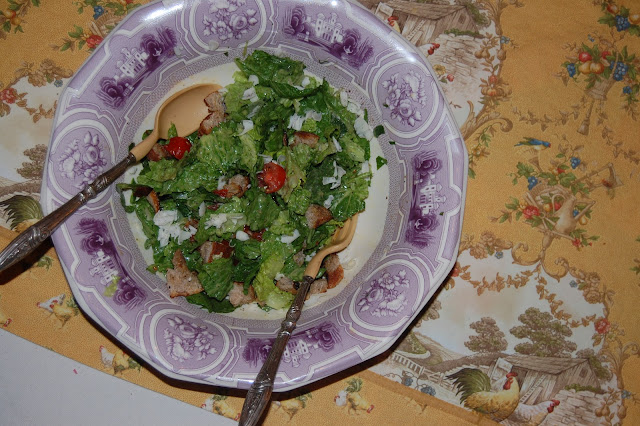 Lynn has been on a serious detox of late but somehow she manages to pull out the stops and make some great stuff that doesn't feel like we are descending into deprivation. One of our favorites is the Canlis Salad (so named for the Seattle restaurant where it originated).  This salad's flavor and heft is particularly satisfying as is the egg based dressing.  No doubt this will be part of Lynn's rotation long after our detox has ended...

1.
Wash the lettuce in cold water, dry thoroughly and put in the refrigerator to chill.
2.
In a large pan set over medium-high heat, fry the bacon until it is nearly crisp, then remove to a bowl. Drain off all but one tablespoon of fat, then add the bread cubes to the pan and toss to coat. Bring heat to low and toast, tossing the bread occasionally with a spoon until it is crisp. Remove to another bowl.
3.
Make the dressing. Place a whole egg in its shell into a coffee cup, then pour boiling water over the top. Allow the egg to cook for 60 seconds, then remove it. Rinse with water until cool. In a mixing bowl, whisk together the lemon juice and olive oil, then crack the coddled egg into the bowl and whisk again, vigorously, to emulsify. Add salt and pepper to taste, then set aside.
4.
In a salad bowl, combine cold lettuce, scallions, mint, oregano and the reserved bacon. Toss with enough dressing to coat the lettuce, then top with the tomatoes, the croutons and a goodly shower of cheese.


Posted by markandlynnarefamished at 4:16 PM