Portrait of the superstar chef as a young man: Danny Meyer The Restaurateur 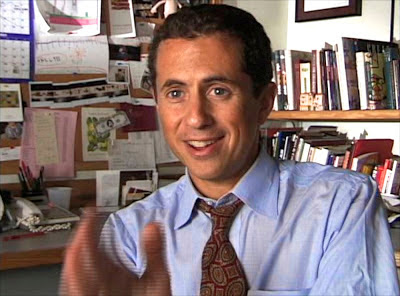 First Run Features is quickly becoming the best "foodie" (sorry to use that overused term) feature and home video distributor in the land.  We were lucky enough to get some copies of a number of these culinary oriented documentaries and they are all particularly absorbing and a nice switch from the often dreary and repetitious nature of some of the restaurant/cooking competition reality shows that make up much of the programming on the major food channels.

Danny Meyer: The Restaurateur was the first film from FRF we got a copy of and it is a very well observed, absorbing film about the great Danny Meyer's attempts to create Eleven Madison Park and Tabla (Tabla closed in 2010, but EMP is still going strong) to add to his fledgling empire started by Gramercy Tavern and Union Square Cafe. Filmmaker Roger Sherman fuses footage spanning 12 years to show the evolution of these restaurants and of Meyer himself (who resembles Jerry Seinfeld's more serious brother).


There are the usual, expected pyrotechnics including dramatic, painful chef firings, missed deadlines, poor reviews from the New York Times (EMP initially got a mediocre 2 star review not once but twice!), dramatic chef hirings and so on.  The film ends with Eleven Madison Park getting a four star review from the New York Times, one of only a handful of restaurants to get this coveted rating from the paper of record.

Mainly, this film is a kind of portrait of the coming of age and growing pains of the contemporary restaurant scene in New York, if not America and a portrait of one of the most influential, hardworking and low key "rock star" (sorry to use that overused term) restaurateurs in America.  Through it all, Meyer remains extremely appealing and impresses as the rare creative individual who fuses great ambition with real decency and a sense of humor about himself.
Posted by markandlynnarefamished at 2:30 PM