Mark and Lynn size up the National Racing Museum and Hall of Fame in Saratoga Springs... 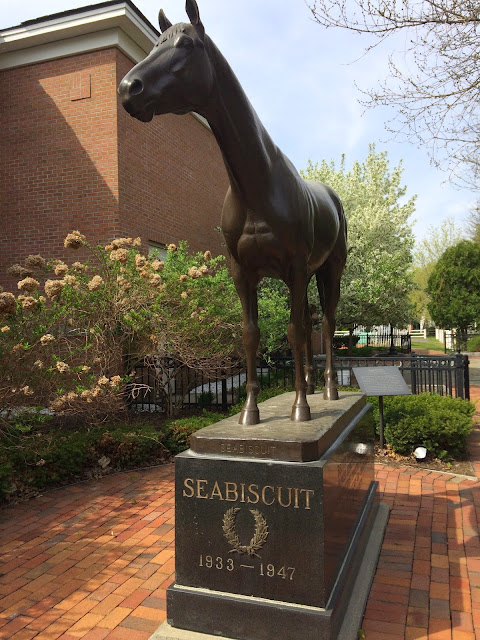 Lynn and I had the great opportunity to visit the National Racing Museum and Hall of Fame in Saratoga Springs, NY.  As you enter Saratoga you are greeted by a sign saying "Saratoga: Health, History, Horses."  The Saratoga Racetrack dates from 1863 and is often considered the first and oldest major sporting venue in the United States.  The racetrack season in the summer is a major social event in New York State.

The National Museum of Racing and Hall of Fame is curated chronologically dividing the history and legacy of Horse Racing in the United Stated into fairly neat time frames (Colonial Gallery, Pre-Civil War Gallery, Post Civil War Gallery down the Contemporary Gallery).  This method helps the casual racing fan (myself and Lynn) a chance to get the history of this sport in the United States in an organized, cohesive manner without being overwhelmed and without needing to be a serious racing aficionado or "racing insider" to engage with it. This curatorial construct shows how the eras connect each era leading the next.  The result of this was that we really felt like we had learned something not just seen an interesting array of artifacts.

Having said that what an interesting array of artifacts!  (One of our favorites was the antique scale used to weigh the riders on race day). The Museum also uses all kinds of ephemera, artifacts and media to tell the story of racing in the United States.  Paintings, trophies, rider silks, programs, photographs and video footage all combine to make the experience a rich one and, again, accessible to an interested but casual fan.

The Hall of Fame commemorates individuals who have achieved an exceptional level of achievement in the sport.  They include horses, jockeys and trainers who have distinguished themselves in the sport.  It is a small, but impressive space with the Hall of Famers racing silks dramatically mounted and lit as part of this exhibit in the NRM.

A great museum on many levels;  artistically, historically, culturally as well as being a great sporting hall of fame....

M&L
Posted by markandlynnarefamished at 5:21 PM