PinPoint Restaurant is our favorite new place in Wilmington, NC.... 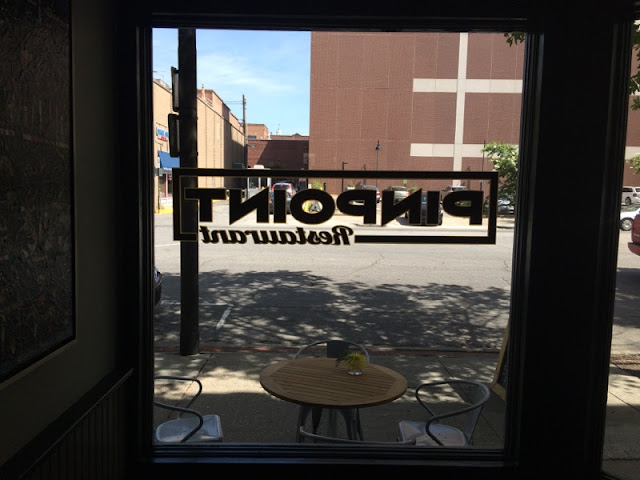 Lynn and I concluded our whirlwind weekend in Wilmington with a brunch at the PinPoint Restaurant in Downtown Wilmington, NC with our son and daughter in law Jono and Kathy.   The location has been home to other businesses and eateries over the years most notably The Deluxe. The Deluxe was part of Wilmington's downtown renaissance in the late 80's early 90's.  It was successful for a time but ultimately poor management and unimaginative cuisine coupled with a tendency to hire staff based on their looks rather than competence caused this restaurant to slide culinary and otherwise until its demise in 2012.

It was funny to be there in the same space and some of those (good and bad) memories from 20 (or more) years ago began flooding back. I was glad to see that the current occupant PinPoint Restaurant has a much better grip on their menu items, service and everything else.  It was a delightful experience starting with our raven haired waitress (from Albany!) who anticipated our needs, answered questions and helped keep us up to date about a dramatic french toast shortage that she helped rectify.

For me, the surprise was the menu.  Lynn and I typically aren't into heavy brunches or breakfast food, particularly on a hot morning in Southeastern, NC.  It was to our relief that the menu was eclectic and imaginative enough for us to get around having to order a delicious though weighty  "hangover breakfast." 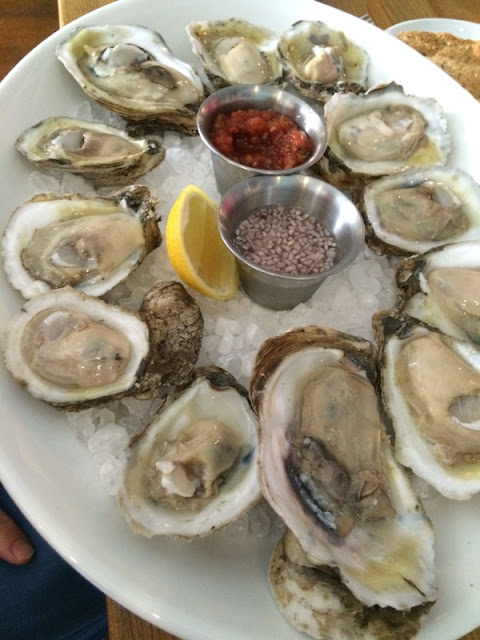 I had a dozen oysters on the half shell which were large, juicy and briny.  Lynn had a cornmeal crusted catfish which was lightly breaded with an unexpected hint of citrus thanks to the citrus based cabbage.  Very filling for both of us without the caloric punch of more traditional bruches.
The ambiance was sophisticated without trying too hard.  The high ceilings and natural light helped bring the summer heat down.  There were many other items on the menu that we were intrigued with (Tuna Tataki, Blue Crab Fritters, Octopus and Pickled Shrimp Lettuce Wraps and so on) so we will definitely be back.

M&L
Posted by markandlynnarefamished at 8:45 AM