WTF?! (What the French) busts French lifestyle myths about food, wine and everything else.... 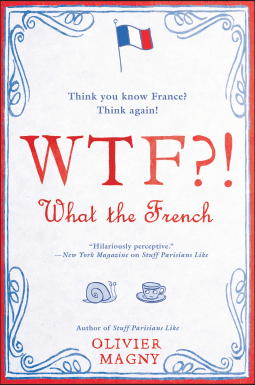 WTF?!: What the French  (New American Library) by Olivier Magny is a series of over 80 vignettes addressing an aspect of French fashion, eccentricities and of course cusine  In the course of his work, Mr. Magny dispels many myths about French food and eating habits.  For instance, he mentions that the three most popular foods in France aren't steak-frittes, cassoulet and magret de canard but pasta, pizza and sandwiches.  Also, while brunch is a staple of French eating and socializing it does not have the same emphasis on imbibing as American brunch.  Mr. Magny does mention that the proliferation of international cooking shows such as Top Chef has brought about a new interest in using organic ingredients.


With regard to French Wine, Mr. Magny mentions that the notion of terrior or region is the dominant principle in wine.  In restaraunts, one doesn't order Merlot or Sauvignon Blanc but Bordeaux, Champagne and Sancerre.  Mr. Magny argues that the notion of specific place in a growing world that emphasizes globalization is what makes  experiencing French wine particularly unique and cultured experience.

Mr. Magny's mini-essays also cover topics like French flower arranging, bread, smoking and grocery shopping.  All of the essays are packed with wit, insight and again, are notable for taking aim at some of the classic myths about French habits and lifestyle (such as "French women don't get get fat").  This is a great read as refreshing as a sip of French Champagne.

M&L
Posted by markandlynnarefamished at 7:29 AM