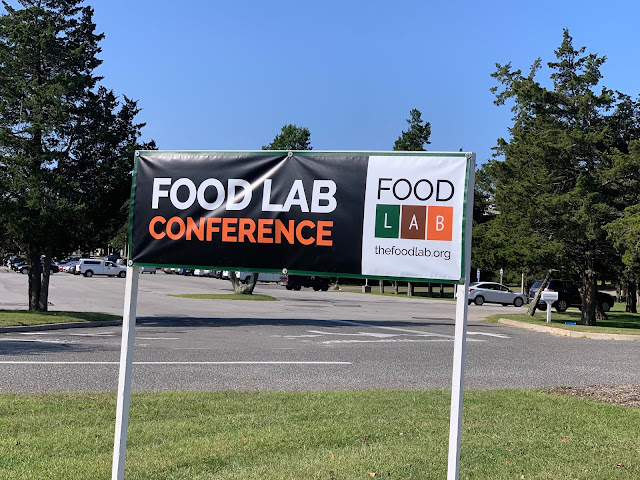 Friday evening featured a conversation with Patty Gentry the owner and chef at Early Girl Farm in Bellport in conversation with Dorothy Kalins, the founding editor of Saveur Magazine.  The conversation featured a screening of footage from a documentary award winning filmmaker Roger Sherman is working on about Patty and her life as a farmer. Ms. Gentry was a warm and engaging presence with a folksy way about her.  The work in progress film showcased the difficulties and joys of farming and Ms.Gentry's near poetic approach to farming in which she compares her tomatoes to Sophia Loren and talks to her vegetables to encourage their growth.

The Keynote was The Power of Local: Taste the Terroir which featured a conversation with journalist Adam Gopnik and beloved Chef and food personality Lidia Bastianich.  Ms. Bastianich's warm and engaging personality quickly won over the crowd.  Despite the title of the keynote the conversation roamed far and wide with some of the most interesting points revolving around her uniquely Italian upbringing under a Communist regime and migration to the United States at the age of 12.  One of the themes of the conversation centered on how travel and particularly migration affect cuisine and people's approach to cooking.

"In my early life I became fascinated how people related to food and how it was part of who they are," Ms. Bastianich observed. "Food is part of their roots and I noticed how hard they (immigrants) try to make it what they remember from Italy. So, Italian American cuisine is a valiant cuisine and reflects new circumstance in the United States such as the abundance of meat which was rarely available or used in Italy."


Other panels covered Long Island Wines with local luminaries such as Roman Roth Winemaker at Wolffer Estate Vineyard.  Mr. Roth emphasized that environmental factors on Long Island such as the ocean, quality of the sunlight and soil allow for wines which he characterized as "the most food friendly in America."

The panel on Hemp Farming closed out the Food Lab programming and it was a crowd pleaser.  David Falkowski, owner of Open Minded Organics Apothecary in Sag Harbor walked in with huge stalks of Hemp which filled the auditorium with the pungent aroma of the plant by way of introduction.  Mr. Falkowski covered a wide range of topics including the benefits of CBD, misconceptions associated with the use of CBD and the potential future of CBD in New York state.

All in all, the 5th Food Lab left us with a feeling near euphoria having been able to eat and drink in abundance the best of Long Island food and wine and an appreciation of the variety of the same.  The event was blessedly free of party politics and the genial atmosphere was palpable.
Posted by markandlynnarefamished at 11:13 AM